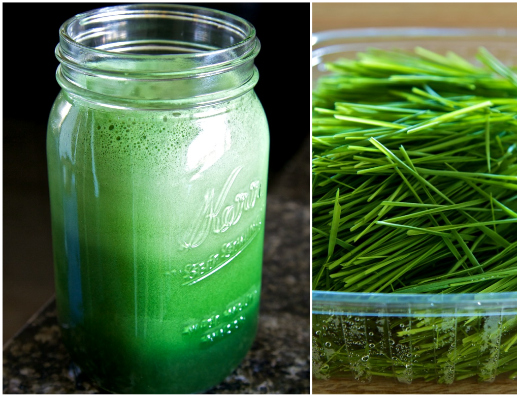 Blend all ingredients together in a blender.

Optional: Blend with an avocado for a creamier and more filling smoothie.

I like to keep this drink in an airtight jar in the fridge and drink it throughout the day. It’ll need shaking every time before you drink it too, which is why an airtight jar is so perfect. If you find the wheatgrass taste too overpowering just start with 1/2oz of it in the juice first, then work up to it. Or when you drink this juice do it as a shot, so it’s gone quickly!

Born in the south of England Russell spent most of his teens and early to mid 20s working in various jobs such as fast food restaurants, manager in a supermarket and as a driving instructor.

It wasn’t until the age of 28 in 2004 when he was in Koh Samui, Thailand, doing a fast to clear up the skin problem that had developed during his time at the fast food restaurant that he discovered raw food.

He quickly got excited about the vibrancy and creativity of raw foods and the health benefits they bring. Spurred on by the fact that he’d never heard of raw food and with a desire to bring it into mainstream awareness in a way that is fun and modern, he set about following his passion, at first as a hobby.

Whilst posting pictures of his food on his blog people started to notice and comment on how great his food looked. Russell discovered techniques and a natural ability to create beautiful raw recipes from widely available ingredients and started teaching people in his local area. News spread and Russell soon found himself teaching people from all over the UK and even people from other countries in Europe and the US, who would travel to come and be taught by him.

It quickly became clear to Russell that his passion was to bring raw foods to anyone that was excited about it and needed the technical knowledge to make it work.

Russell has taught thousands of people world-wide about raw foods, through his blog, live classes and hishomestudy DVD course.

He has just completed a 1 year guest instructor in residence position at 105degrees in Oklahoma City, USA – and is now working on several new projects including a recipe book to be released spring 2013.

As well as his new projects he continues to inspire people through his website, blog and eZine.

Russell’s passion is to show you that far from feeling restricted on a raw food diet you have an abundance of options, whether that being eating raw sandwiches all week or putting on a show-stopping dinner party for friends.

Powered by Magento 2 Extensions by Mageplaza